We’ve all been there.  You spend hours and hours working on a lesson hoping that it is a hit with your students and inspires them to want to dive deeper into content, to feed off of your enthusiasm as they take an initial question or problem and use creative approaches to go their own ways to be creators and collaborators themselves.

Rewinding to the ADE Academy 2017, I felt like a student watching Ben Mountz work wonders with Keynote’s shapes and magic move.  As a history teacher, this had so much potential to be used to tell a story, but moreover, to put my students in a position to tell a story.

After my students used stop motion to tell the story of Jamestown, it was now time to tell the story of some of the best rising action that you can experience in school, the build up to the American Revolution.  But, how to inspire them again to be digital storytellers?  I purposely would leave my projector on in the morning, during homeroom, and during the day as students watched me make my first attempts of using Keynote’s Magic Move.  What makes this tool even better is the ability to not only use Keynote’s shapes, but also to be able to edit those shapes and create your own.  My goal was to eventually be able to create all of my own graphics and shapes. So, I got started.  I began by using historical images and Magic Move and moving them around to create animated scenes.  But, I wanted to take it to the next level.  It was time to make my own shapes.

“What is he doing?”  was a common question as students would come into my first period, watching and questioning to each other.  Admittedly, some of my first attempts were not the greatest.  In fact, my attempt to draw my own head as the head of a colonist and then fill in the rest with shapes looks, at best, extremely goofy.  But, I decided to leave it in to show that it was a work in progress.  What I ended up with was hours of work for a 30 minute discussion, however, it was a discussion with lots of “What do you think might happen next?”  “What should happen next?”  “How could you show what might happen next?” In the back of my mind, I was hoping that students would be “hooked” just from seeing some of the possibilities of Keynote, shapes, and Magic Move.  They were.

“What did you use to make that?” This quote actually came from another teacher who happened to view some of the animation possibilities in Keynote, not believing that this was even possible within the application.

A 2:00 Minute version of the story of the rising action of Britain and the American Colonies is available here.

No lie, but students began asking, “can we make one of these?”  Several students in my afternoon classes asked if this could be a class at North Hills.  Not only am I hooked on using Magic Move, but, I was glad to pass on the inspiration of Ben Mountz to my students.  We already have some great ideas that I look forward to sharing in the very near future. 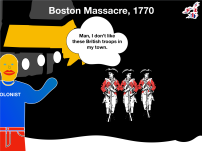